Why is this Program needed when there is an existing family court and child protection system?

There is a serious access to justice problem in the Canadian family courts. The family justice system is too complex, too slow and too expensive. The family justice system is oftentimes incapable of resolving issues which are reflective of the needs of the people it is meant to serve, especially the children who are most adversely affected by the outcomes of the decisions.

While there are have been many efforts to reform the family court system, the system continues to lack coherent leadership, institutional structures that can design and implement change and appropriate coordination to ensure consistent and cost effective reform to meet the needs of families. In summary, the existing family court system is failing families thereby causing significant disrepute to the public’s respect for the administration of justice. Public confidence in the family court system is at an all-time low.

Some of Canada’s highest ranking judicial officials have spoken publicly about the damage being done to children and families as a result of the current family court system and the need for radical change to the way family conflicts are handled. Former Supreme Court of Canada judge, Mr. Justice Thomas Cromwell, former Chief Justice Warren Winkler and former Chief Justice of the Supreme Court of Canada, Beverly McLachlin, are just a few of the many who have spoken out about the dismal failure of the family court system in Canada. 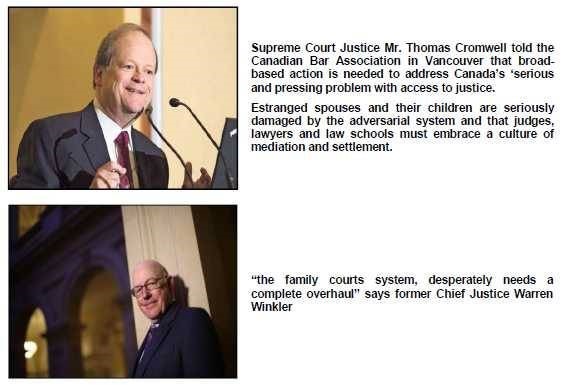 The Premier Ontario has also spoken publicly about how the province’s child protection system is in a mess, bogged down in bureaucracy and lacks accountability. She went so far as to say the system needs to be blown up.